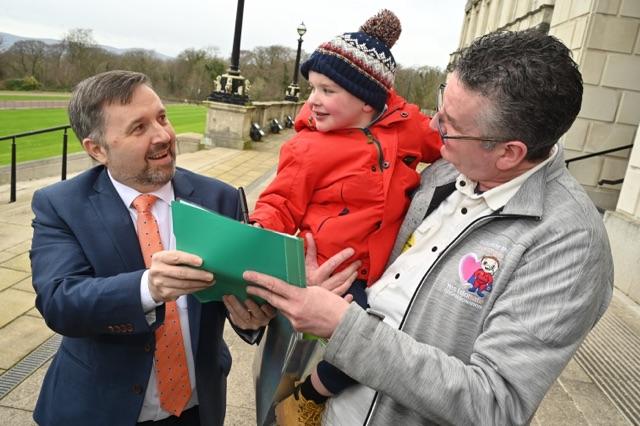 The Organ and Tissue Donation (Deemed Consent) Bill, which passed the final stage of consideration in the Assembly today, will be known as ‘Dáithí’s Law’ in recognition of five-year-old Dáithí Mac Gabhann.

From 2023, adults in Northern Ireland will be considered potential organ donors unless they choose to opt out or are in an excluded group.

Dáithí has been on the waiting list for a heart transplant since 2018. During this time his family have worked tirelessly to campaign for a move towards soft opt-out law and to promote organ donation.

Welcoming the landmark law change, Health Minister Robin Swann said: “I’m delighted that the soft opt-out bill has passed today. It marks a hugely significant step forward for all those waiting for a transplant.

The Health Minister also thanked campaigners for their support in getting the law passed. Minister Swann said: “I want to once again place on record my sincere thanks to Jo-Anne Dobson who personally first convinced me that our organ donation laws needed to change. I also want to thank the many individuals, families, teachers, patient support groups and charities across Northern Ireland who have worked tirelessly over many years to promote organ donation. There are too many to name, but particular recognition must go Dáithí, Máirtín and Seph Mac Gabhann for their resolve in not only campaigning for a change in law but also in raising awareness of organ donation. It is fitting that the change in organ donation law be referred to as ‘Dáithí’s Law’."

With effect from Spring 2023, it will be considered that everyone would be willing to donate their organs unless they have formally opted out or fall into one of the exempted categories. Families will continue to be consulted about donation as well as considerations around faith and beliefs. A public awareness campaign will be launched ahead of the change coming into effect, to make sure people understand the new opt-out system and the choices they have.

Speaking following the final Assembly reading, Máirtín Mac Gabhann, said: "This is a very emotional day for us as a family. Dáithí was accepted onto the waiting list for a new heart in 2018 and since then we have put everything into raising awareness of organ donation and campaigning for the law to change.

"It has been a long journey to get to this point but we are just so happy that this potentially life-saving legislation has been passed for Northern Ireland and very proud that the new law will be named after Dáithí.”